What if you had to choose between love and knowledge? 17th May, 7 pm 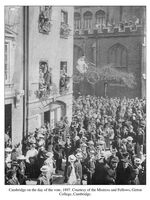 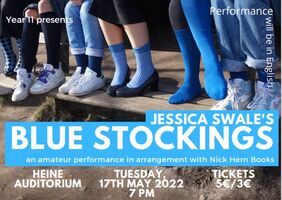 Jessica Swale's "Blue Stockings", first performed at The Globe Theatre in London in 2013, shows the struggle of female students fighting for academic equality at Cambridge University. The play is set in 1896 at Girton College, Cambridge, where women were allowed to attend lectures, but the university refused to award them degrees.

Women at Girton were subjected to appalling hostility from male undergraduates who patronised or bullied them. They were chaperoned when they attended mixed lectures and were not allowed to meet male students unsupervised. The play opens with a speech by Dr Henry Maudley, the renowned psychiatrist, who refers to academic women as "BLUE STOCKINGS" and warns that giving women degrees is “detrimental to their physiology, to the family and to the future of our society” (Act I, Prologue).

Many challenges face women all around the world who are attempting to gain an education. Swale dedicated the play to Malala Yousafzai, a Pakistani activist for female education. Malala's father ran a school in Pakistan: He was an outspoken critic of the Taliban, who banned girls from going to school. In 2012, aged 15, Malala was shot in the head for defying the ban. She survived the initial attack and was flown to Birmingham in a critical condition, where she received life-saving surgery. There was international outrage following this attack. In 2014 Malala was awarded the Nobel Peace Prize for her campaign for female education setting an important sign against prevailing sexism and violence shown recently by current developments in Afghanistan where the Taliban have started banning girls from secondary school education once again.